A Poem from Last Saturday's Workshop

Last Saturday, I threw a workshop at the Main Library. It was a great group, with people who had been writing for years mixed in with people who hadn't written at all since high school. One of the writing prompts involved using a specialized vocabulary--the language of skateboarding or juggling or weather or scuba diving--to talk about the arc of a relationship. They were all pretty terrific, but Moira Gehring, who, together with the other good folks at the Friends of the Library, organized the workshop, wrote a terse poem using the language of economics that was both poignant and darkly humorous. Here it is:

An interdependence of incentives marked the early years.

The collateral of human capital enabled a balance of trade... with a surplus of good feeling.

Our quota quickly became the deflation of shared dreams.

And so we went from surplus to scarcity.

Posted by Unknown at 7:41 AM No comments: 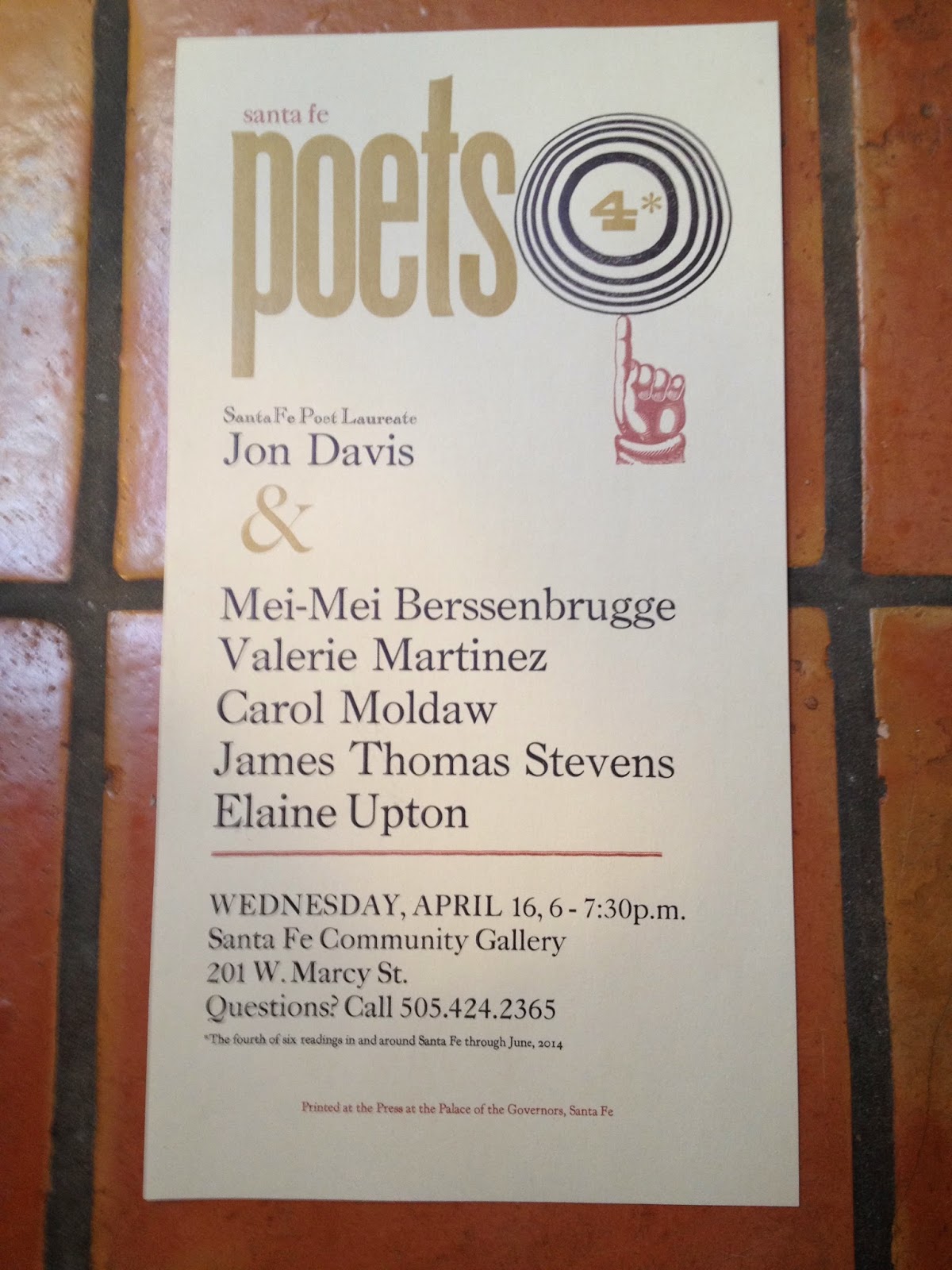 SANTA FE, NM — On Wednesday, April 16, 2014, from 6:00 to 7:30 p.m., City of Santa Fe Poet Laureate Jon Davis will host “Santa Fe Poets 4,” the fourth of six readings, the remainder of which will take place over the next three months at various venues in and around Santa Fe. Each reading will feature a different group of five poets reading with the poet laureate. The April reading will take place in the Santa Fe Community Gallery. The event is free.

At this reading, Davis will read from his new manuscript and from his most recent book, Preliminary Report, published by Copper Canyon Press in 2010. In addition to being Santa Fe’s fourth poet laureate, Davis is Director of the Low Residency MFA Program at the Institute of American Indian Arts, where he has taught for 23 years.

Joining Davis for Santa Fe Poets 4 will be:

Mei-mei Berssenbrugge, who was born in Beijing and grew up in Massachusetts and is the author of thirteen books of poetry, including, most recently, Hello, the Roses (New Directions, 2013) and I Love Artists: New and Selected Poems (U. of California, 2006). She lives in New York City and northern New Mexico.

Valerie Martinez, former Santa Fe Poet Laureate, who is the author of four books of poetry, including, most recently, Each and Her (University of Arizona Press, 2010), which won the 2011 Arizona Book Award. Her first book of poetry, Absence, Luminescent won the Larry Levis Prize.

James Thomas Stevens, who was born in Niagara Falls, New York, and is a member of the Akwesasne Mohawk Nation. Stevens has published seven books of poetry, including Combing the Snakes from His Hair, for which he was awarded a 2000 Whiting Writer’s Award. He teaches creative writing and literature at the Institute of American Indian Arts.

Elaine Upton is an educator and translator and the author of a collection of poems,  Children of Apartness (Washington Writers’ Publishing House).

(Carol Moldaw, the scheduled fifth reader, has had to cancel and will participate, instead, in Santa Fe Poets 6 in June.)

Established in 2005, the Poet Laureate program actively promotes poetry and the spoken word as integral parts of our civic life.