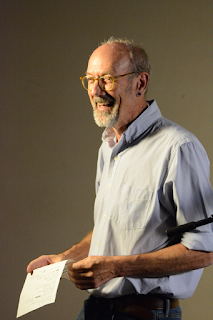 Jon Davis is the author of six full-length collections of poetry: An Amiable Reception for the Acrobat (Grid Books, forthcoming, 2019), Improbable Creatures (Grid Books, 2017), Heteronymy: An Anthology (La Nana Creek Press, 2015), Preliminary Report (Copper Canyon Press, 2010), Scrimmage of Appetite, University of Akron Press, 1995), and Dangerous Amusements (Ontario Review Press, 1987). He is also the author of five limited-edition chapbooks, including Thelonious Sphere (Q Ave. Press, 2014) and Loving Horses (Palace Press, 2014).  Two new collections of poems, The Many-Body Problem and How Is This Fun: The Poems of Chuck Calabreze, and a collection of short fiction, Postcards of the Hanging, are complete. Dayplaces, which Davis translated from the Arabic with the author, Iraqi poet Naseer Hassan, was published by Tebot Bach Press in 2017.  Davis is currently co-translating an expanded version of Dayplaces. Davis’s short stories have appeared in recent issues of The Stockholm Review, Monkeybicycle, Flash, Versal, McSweeney's Internet Tendency, failbetter, and the anthologies Flash Fiction Funny and Flashing for Comic Relief. For three years he taught screenwriting for the ABC/Disney Summer Film & Television Workshops at IAIA. Short films made from his screenplays have played in festivals across North America. He has received a Lannan Literary Award, the Lavan Prize, the Off the Grid Poetry Prize, a Provincetown Fine Arts Work Center Fellowship, and two National Endowment for the Arts Fellowships. He taught for 23 years at the Institute of American Indian Arts before founding, in 2013, the IAIA low residency MFA in Creative Writing. He retired as director of that program in 2018.

Sometimes, he shows up as this guy, Chuck Calabreze. Nobody knows why.

David Foster Wallace's Infamous Review of The Best of the Prose Poem:
https://www.google.com/webhp?sourceid=chrome-instant&ion=1&espv=2&ie=UTF-8#q=Jon+Davis+poems&start=50

Review of Scrimmage of Appetite in The Prose Poem:
http://digitalcommons.providence.edu/cgi/viewcontent.cgi?article=1529&context=prosepoem

Review of Two Lines in the Los Angeles Review of Books:
https://lareviewofbooks.org/review/country-kind-song-landmarks-dayplaces-world-literature

The Spoon River Poetry Review (review of an anthology I don't appear in):
http://srpr.org/files/39.1/39.1-review-essay-excerpt.pdf

11 Essays from The Yawp Barbaric:
http://www.sfreporter.com/santafe/by-author-508-1.html

How a Poem Happens:
http://howapoemhappens.blogspot.com/2014/09/jon-davis.html

Posted by Unknown at 9:49 PM No comments:

Writers Festival at the Institute of American Indian Arts, July 19-25 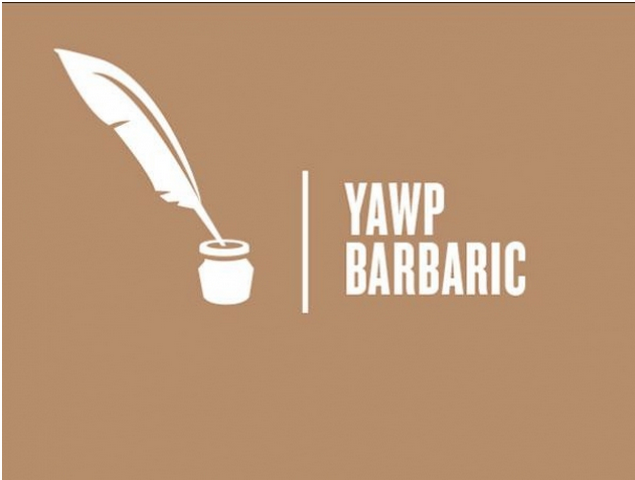 We'll be yawping over at the Institute of American Indian Arts this coming week. Scroll down or go to www.iaia.edu for the full schedule. Here's a glimpse of four of the writers who will be reading, but it's just a glimpse of a much larger scene: http://www.sfreporter.com/santafe/article-8932-dramatic-setting.html
Posted by Unknown at 8:56 PM No comments: 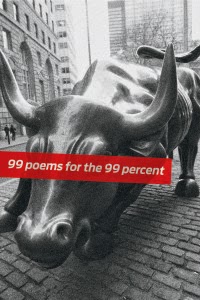 Anthology editor Dean Rader, Dana Levin, and I will read from 99 Poems for the 99 Percent at 4 pm on Saturday, July 26, in the O'Shaughnessy Performance Space at the Santa Fe University of Art & Design (follow the signs to Benildus Hall). The reading is free, of course!


American poetry has a rich tradition of taking on important political and social events. The 99 poems in this diverse and dynamic new collection demonstrate how engagement with what Wallace Stevens called “the actual world” does not diminish poetry’s punch—rather it makes it hit harder. Born out of a popular blog begun by Dean Rader at the height of the recession and at the infancy of the Occupy movements, 99 Poems for the 99 Percent shows that the aims of poetry and the aims of democracy are hand-in-hand. These are poems of anger, love, protest, humor, contemplation, hope, frustration, and beauty. These are poems by the famous and the marginal, by the heard and the ignored. These are poems that speak to the past as well as the future. These are poems of and for the real America. 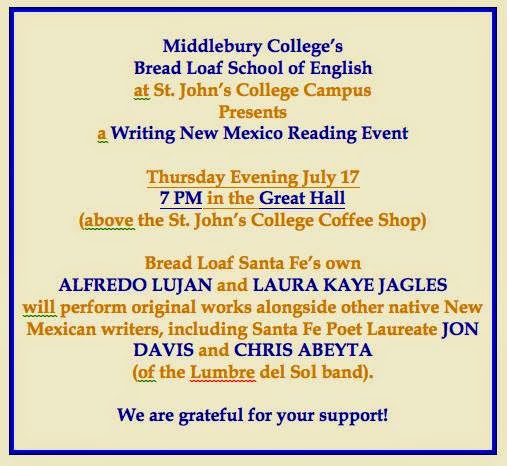 Posted by Unknown at 7:54 PM No comments:

The Institute of American Indian Arts' Writers Festival is Here! 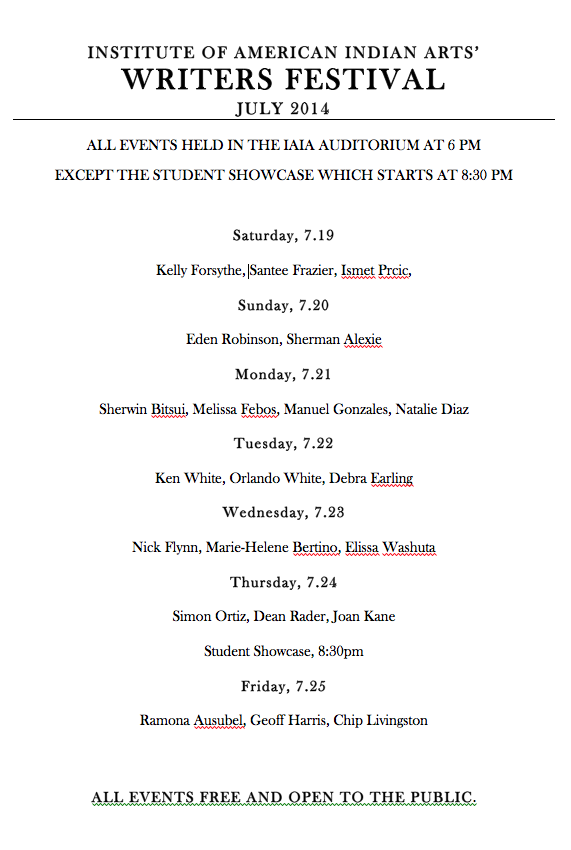 SANTA FE, NM — On Sunday, June 29, 2014, from 3:00 to 4:30 p.m., City of Santa Fe Poet Laureate Jon Davis will host “Santa Fe Poets 6,” the sixth and last of six group readings. Each reading has featured a different group of five poets reading with the poet laureate. The June reading will take place in the Institute of American Indian Arts’ Lloyd Kiva New Welcome Center. The event is free.

At this reading, Davis will read new work and work from his most recent published book, Preliminary Report, published by Copper Canyon Press in 2010. In addition to being Santa Fe’s fourth poet laureate, Davis is Director of the Low Residency MFA Program at the Institute of American Indian Arts, where he has taught for 24 years.

The other poets reading in Santa Fe Poets 6:

Britta Andersson received her BFA from the Institute of American Indian Arts and her MFA from New York University. Her poems have appeared in the International Poetry Review, Oregon Literary Review, and Salt Hill.

Amy Beeder is the author of Burn the Field and Now Make An Altar (Carnegie Mellon, 2012). Her work has appeared in Poetry, Ploughshares, The Nation, The Kenyon Review, The Southern Review, AGNI, and other journals. She has taught poetry at the University of New Mexico and Taos Summer Writers Conference. She has received the “Discovery”/The Nation Award, a Bread Loaf Scholarship, a Witness Emerging Writers Award, and a James Merrill Residency. She has worked as a freelance reporter, a political asylum specialist, a high-school teacher in West Africa, and an election and human rights observer in Haiti and Suriname.

Hakim Bellamy is the author of Swear (West End Press, 2013). He became the inaugural poet laureate of Albuquerque in 2012. He has been on two national champion poetry slam teams, won collegiate and city poetry slam championships (in Albuquerque and Silver City, NM), and has been published in numerous anthologies and on inner-city buses. A musician, actor, journalist, playwright and community organizer, Bellamy has also received an honorable mention for the Paul Bartlett Ré Peace Prize at the University of New Mexico.

Donald Levering was the recipient of a National Endowment for the Arts Fellowship  in poetry and winner of the Quest for Peace Writing Contest in rhetoric. He was also an Academy of American Poets’ Featured Poet in the Online Forum.  Recent collections include The Number of Names, Sweeping the Skylight, and Algonquins Planted Salmon. His latest book is The Water Leveling With Us (Red Mountain Press, 2014). He lives in Santa Fe with the artist Jane Shoenfeld.
Luci Tapahonso is the Navajo Nation’s first Poet Laureate. She has taught at the University of Kansas, the University of Arizona, and ast the University of New Mexico. She is the author of five books of poetry and stories, and one children’s book. In 1999, she was named Storyteller of the Year by the Wordcraft Circle of Native Writers, a year after being recognized with the Regional Book Award from the Mountains & Plains Booksellers Association.
The Institute of American Indian Arts’ Lloyd Kiva New Welcome Center is located at 83 Avan Nu Po Road in Santa Fe, New Mexico. For more information, call Jon Davis at 424.2365 or e-mail him at jdavissimo52@gmail.com.

Established in 2005, the Poet Laureate program actively promotes poetry and the spoken word as integral parts of our civic life.
Posted by Unknown at 5:00 AM No comments:

"The Poetry of Light": A Writing Workshop 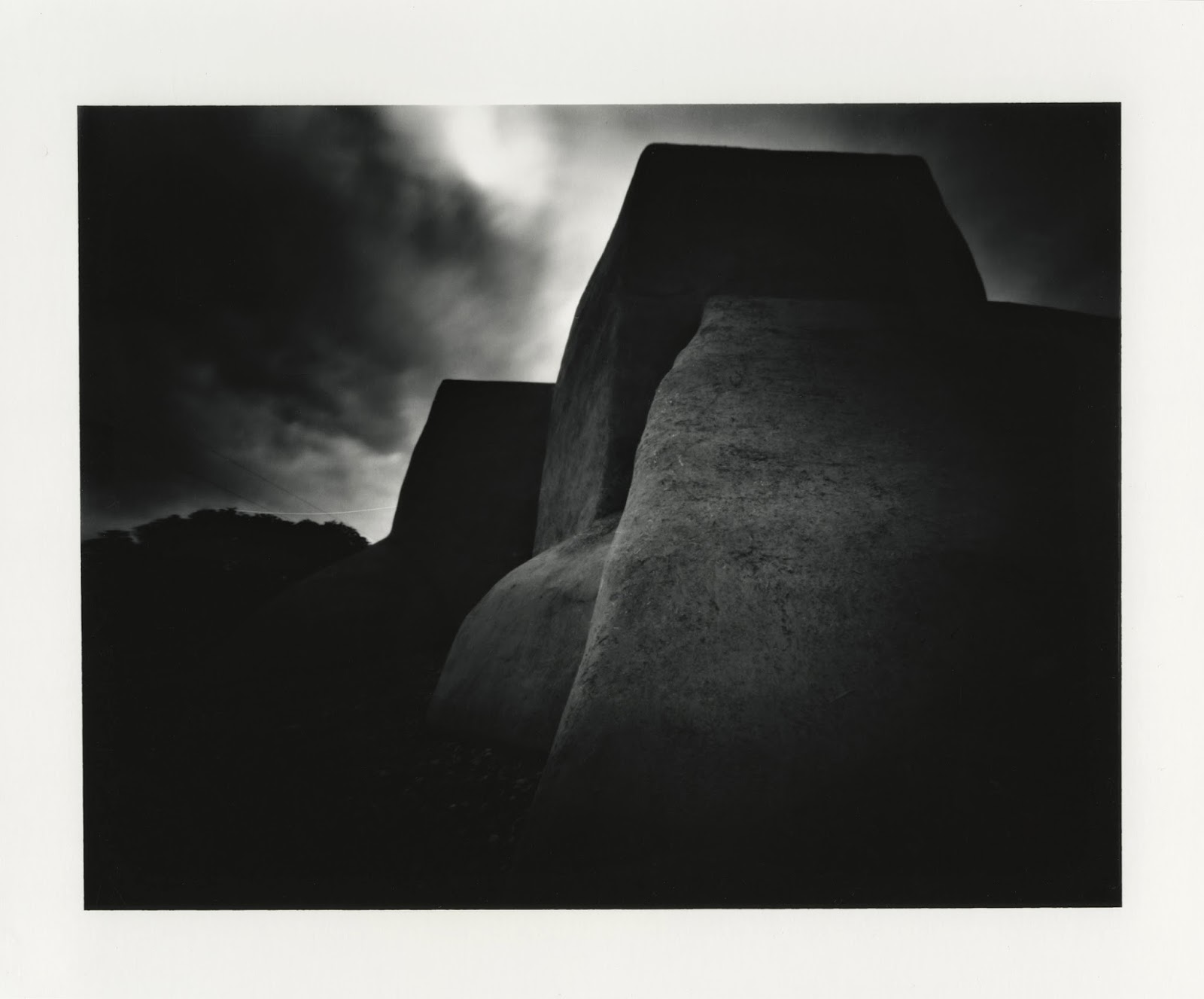 Join Santa Fe Poet Laureate Jon Davis for a writing workshop based on Poetics of Light: Pinhole Photography. Open to high schoolers and older, the session brings participants into the Herzstein Gallery to study pinhole photographs and inhabit them imaginatively. Let language carry you toward and away from the images. Draft poems that engage what’s in front of you—and explore what is only suggested by these often mysterious photographs. Free. Make a reservation by calling 505-476-5096.
Posted by Unknown at 7:08 AM No comments: